A bug dropped at my feet today. At first I thought a fuchsia blossom, frilly and red, fell off my shoulder. When I bent for a closer look, I saw a bug with pretty markings.

A frantic run for the camera and another run for a live battery meant the bug had time to tuck in its underwings and resolve to a muted coloration. 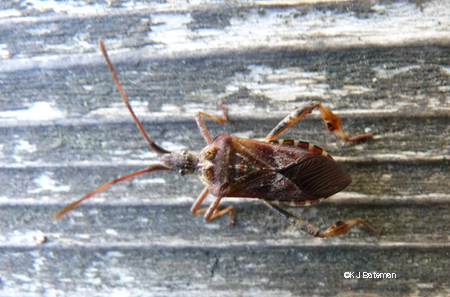 According to Insects of the Pacific Northwest by Peter and Judy Haggard, this is a Leptoglossus occidentalis or Western conifer seed bug.  While you rarely see them, they are not rare but are hanging out high above your head, feasting on fir nuts.

This is probably a good thing because they emit a stinky odor when disturbed. Luckily, this one didn't mind having his picture taken.

The Douglas firs don't overhang the deck, so where did he come from? Did he wiggle out of a crow's mouth to plop on my deck? Maybe he wanted to grab some of our basil leaves for a little al fresco pesto.

Isn't it fun to think of the millions of little lives going on all around that you are completely unaware of?
Posted by KJ Bateman at 3:15 PM