One of the delightful signs of spring is the baby spider nursery. Every year we find one in a new place.  Some years they are in places that conflict with human traffic. This year was one of those years. It looked as though the webbing with the egg sac started out on an angle between the front window and the porch. In the time it took to get the camera, the ball of spiderlings had settled onto the porch right in the path from driveway to front door. 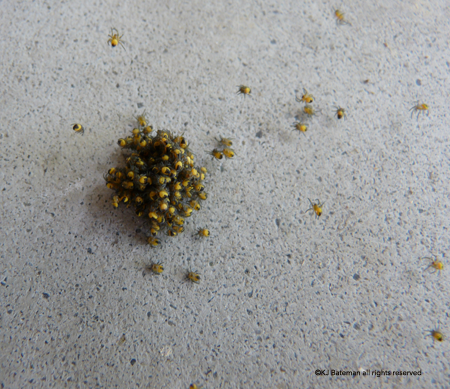 I ran string around the porch posts and made signs.  Over the course of three to four days they ventured farther from the nest, at first returning each night to cuddle together in a ball. It takes three to four days for the babies to disperse completely. These will grow up to string their beautiful webs around the garden, catching raindrops in the late summer. 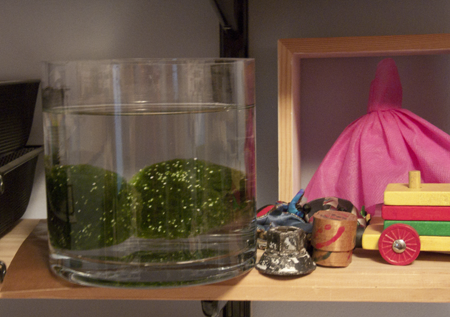 The Marimos are recovering from their unpleasant bout with slime. They came with an attractive white sand-like substrate. Unfortunately, the substrate stuck to the sides of the Mos. (You can still see some of it clinging to them)

When I gave them their summer clean-out, I decided to put pebbles in the bottom. Pebbles that I had previously used in the bottom of a planter for extra humidity and which had been outside for a year and were a little green. I washed them off, layered them in the glass and put the Mos back. Over the course of the fall the water gained a slime covering which drifted down into the Mos' space.

I woke in the middle of the night with horror (not an uncommon occurrence). Slime was growing in my office and choking my Marimos.

I lay awake formulating a plan of attack. Could the slime be blue-green algae, toxic to those who might drink it?  I resolved to bury the slimy water in a hole, rinse the Mos before restoring them to a pristine bowl.

The next day I prepared for the attack. I went to the dollar store to get  a strainer, slotted spoon and bucket. I went to Goodwill to get a new, bigger container.

I dug a hole, put a hanger around the strainer and balanced it over the hole. I drained the mucky water off and rinsed the Mos with water from the bucket. I couldn't use the hose because we were having an unusual bout of freezing weather and the hoses were stiff with ice. The Mos were put into their new larger container with nothing on the bottom in case the slime came back.

It's been a month and all seems to be well. No slime. So far.
Posted by KJ Bateman at 10:00 AM No comments:

Return of the Crawling Dead-Not All Caterpillars Are Cute

Hello friends. What horrors do I have in store for you today? Something really creepy, though I realize now that I should have taken video rather than still picture so you could experience the true awfulness of what I am about to reveal. 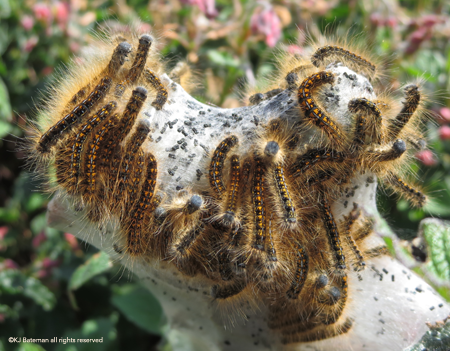 Actually, they look pretty cute in the photo. This is because you can't see them TWITCH! Though I find many things in nature scary (see blog title), few things truly make my skin crawl. Tent caterpillars are one of them.

Do you have them where your are? I sincerely hope not. Malacosoma californicum all live together in a big web nest. We've had so few in the past several years I had forgotten about them. The nests can grow quite large, engulfing whole branches. The webbing of the nests is disturbing, recalling Mirkwood and large bodies running through the tree tops.

But that's not the creepiest part. They twitch when they feel threatened and it looks synchronized, almost as though they were all controlled by one big brain. AHHH!

I saw these on rugosa bushes in a store parking lot. I do hope we won't have any in the Scaredy Cat Naturalist's yard. They would tax my wildlife sanctuary sensibilities. So far the only creatures not welcome here are fleas and mosquitos.

Posted by KJ Bateman at 9:50 PM No comments: